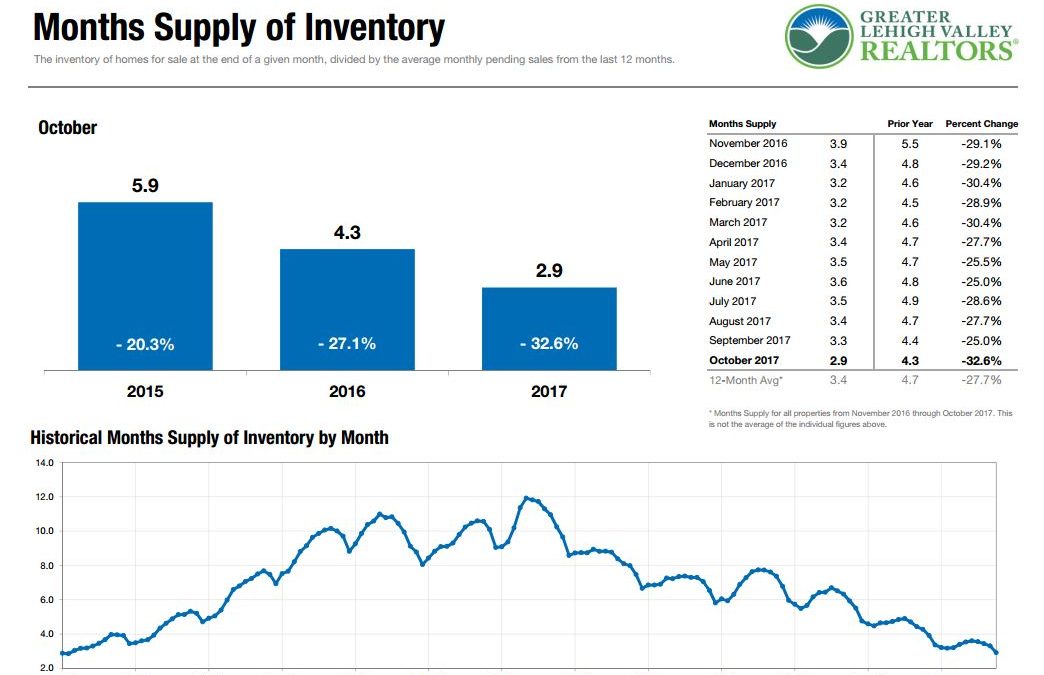 The good news in this Inman article is that single family housing starts are up and that the “inventory shrinkage” should stop by Fall of 2018.  In the Lehigh Valley, building permits were in the hundreds at the peak of the market 8 to10 years; in Nov 2017 they were in the 50’s.  But we are seeing signs across the Valley that new construction is picking up again, good news for 2018.

Low inventory will be huge challenge to home sales in 2018

On Tuesday, the real estate industry breathed an unexpected, if temporary, sigh of relief with news that single-family housing starts spiked to 930,000 units in November, up 5.3 percent over October for a 10-year high unattained since the subprime mortgage crisis of 2007.

The gains piggybacked on increases in October, when overall housing starts rose to a strong annual rate of 1.256 million units in the aftermath of powerful hurricanes over the summer that slowed housing construction in Texas and Florida for three months before resuming in the fall.

But with inventory still treacherously low across the United States, economists and real estate analysts told Inman that bouncing back to a 50-year average rate of 1.5 million new units remains a challenge worth fighting for in 2018. Indeed, real estate experts agreed that inventory challenges will likely persist into the new year.

Currently, overall inventory for existing single-family homes and multifamily homes stands at 1.67 million, according to November data provided by the National Association of Realtors.

“We have gone 29 months seeing overall inventory decline on a yearly basis, and that’s had a long-lasting effect on the market,” said Javier Vivas, director of economic research at Realtor.com. “That should keep the total number of homes for sale constricted for the good part of next year. However, based on movement we detected this year, we also expect those inventory declines to decelerate slowly throughout next year, and overall inventory could stop shrinking as early as fall 2018. Growth in new construction will be key for that recovery.”

Svenja Gudell, chief economist at Zillow, said that, today, there are 12 percent fewer homes for buyers to choose from then there were just three years ago, and that, as of October, more than half of U.S. homes for sale were in the top one-third of home values. In other words, pricey.

“Inventory will remain a major concern in 2018, continuing to play a significant role in pushing up prices,” said Gudell, who predicted it will remain a seller’s market in the new year. “It will create particularly strong headwinds for first-time homebuyers, who don’t have the benefit of profits from a prior home sale to boost their down payment and make them more competitive.”

According to a Redfin housing market forecast, meanwhile, inventory will remain a major factor in 2018, continuing a trend that began three years earlier. The forecast anticipates small increases in inventory at the high-end of the market by year-end, but starter-home inventory, which has not increased meaningfully since 2011, will continue to stagnate in the new year.

“We’re just not building right —  we’re doing it wrong,” said Nela Richardson, chief economist at Redfin. “Not enough, for sure, but it’s also kind of been misplaced and mispriced. We built up high-end homes in big cities and that works for highly paid millennials — and every city has them — but what we need now are starter homes for starter families, and we’re not seeing that kind of building. We’re not seeing building near transit and we’re not seeing building at the price points that people need and can afford — so that will still be a challenge going forward.”

Until that happens, the lack of inventory will continue to be a thorn for brokers, developers and homeowners, insisted Matthew Gardner, chief economist at Windermere Real Estate, who nonetheless believes that the number of homesellers overall will increase modestly in 2018.

“We continue to be stuck in a ‘chicken-and-egg” situation, whereby would-be sellers know that they will likely have no problem selling their existing home, but they will not list until they have found somewhere to buy, and if they can’t find somewhere to buy, they won’t list,” said Gardner, adding that affordability, closely intertwined with inventory, may emerge as the biggest issue of 2018. “I do expect to see an uptick in new home starts, but unfortunately it will not be enough to meet pent-up demand.”

Why Choose Our Team?

Each member of the team is an expert in their area and contributes to the synergy. Our well tested systems will smooth the way from starting line to contract dotted line. Contact us for Real Estate services that exceed your expectations and help you achieve your home buying and selling goals.

Visit www.LVhomeExpert.com and visit our Facebook Page to view videos of homes for sale in the Lehigh Valley, Pa, client testimonials, and other helpful real estate information!